Kuala Lumpur, 30th August 2021 (TDI): On the 64 National Day of Malaysia, the Prime Minister of the country, Muhyiddin Yassin, wishes the people of his country a happy National Day in a Twitter video. The National Day is also called the “Hari Medeka” and is celebrated on  August 31 in keeping with the Malayan Declaration of Independence in 1957 when the country gained independence from the colonial rule of the British.

Malaysian independence is attributed to the first Malaysian Prime Minister Tunku Abdul Rahman, who negotiated with the British for independence. The celebrations for this historic day start early in the month and are celebrated with parades and national festivities across the country. 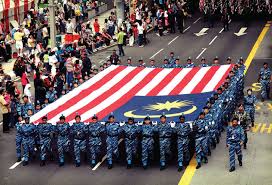 © 2021 The Diplomatic Insight | All Rights Reserved | Powered By Ideatech